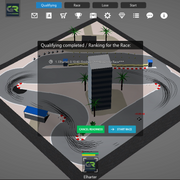 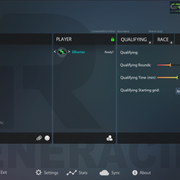 I can notice i've never checked the 'off topic' subforum. Never read about GeneRacing before, but looking at this, including the qualifying and stuff, looks great. I've always wondered about how GR would be if only it had quali.
To finish first, first you have to finish!
Top

Hey Txizzle...nice to have you here.
Yes, i was moved to the "OT-Area" with my project and i´ve to accept this

of course I would be happier if i got a main-headline on the startpage haha.

The qualifying stuff is one thing of many..... we´ve implimented it, following a user/driver-wish before 3 weeks on discord.
You are invited to join our discord: https://discord.gg/Xg4VeaA

And there you get the possibility to be an alpha-animal

A short overview of the current state:
- Steam integrated
- MacOS + Windows
- Qualifying Mode (Laps limited or time limited)
- Racing Mode
- full compatiblity to all GeneRally-Tracks (load your TRK-Track directly from Editor in GeneRacing)
- very extendable car physics, which is adjustable at Alpha-Phase over settings
- Steam Achievements
- Scoreboards for every track (Best laptime, average laptime, lap count)
- DriftMode possible (at the moment over carphysics-settings) but a special mode will follow
etc, etc, etc.... the list is long

I'm getting my next PC sometime soon, i'll have a look into it all by then. Looking forward to it!

To finish first, first you have to finish!
Top

). Quite amusing. Where do i actually get the game to test? Requires downloads, or is it only played online?
To finish first, first you have to finish!
Top

There is a Discord server for GeneRacing with the discussion about all project.

Txizzle wrote:Had a look at that youtube video (i'm the guy that liked it

). Quite amusing. Where do i actually get the game to test? Requires downloads, or is it only played online?

Yes, Gzehoo is right. The easiest way is to come to the discord server to join the community.
At the moment every racer which is motivated to give feedback is welcome and invited to test the alpha - ill send you a key to access the game over steam.

We´ve reached the 45 players mark at the moment and decided to cut it at 100 players. first come, first serve.
Players with non active feedback over a cycle of 3 updates will be revoked to be fair in both directions.

Currently we finished a sprint (update-cycle) in approx. 2 weeks, which results in 2 updates a month.
So, the average possible feedback time results in 6 weeks for each user - a realistic timeslot. 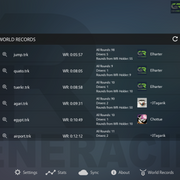 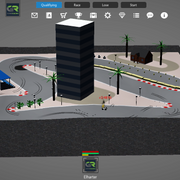 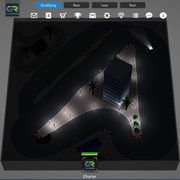 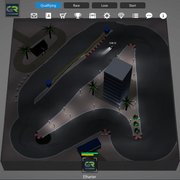 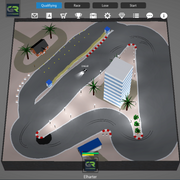 Looking good! Getting my new computerscreen tomorrow, so no more reasons not to run it yet. I wanna get a hands on driving there.

To finish first, first you have to finish!
Top

Finally weve upgraded the WHOLE Terrain-Environment in the Background which is not visible yet - thats why this update has a delay.

** Fixed
* [GEN-60] - Race Endpanel shows not the sum-time at the end as expected, headline is missing (race)
* [GEN-142] - Fuel/Tire/Damage bars are wrong assigned if more then 2 players
* [GEN-143] - Fixed existing qualitime show up (from the quali/race before)
* [GEN-147] - Increased the AirTime handle to steer the car in the air for 1.5seconds
* [GEN-148] - Drastic reduction of the static downforce to handle small hills, more realistic jumps,...
* [GEN-149] - Changed switch of car-lights according to day/night lamps
* [GEN-151] - Fixed long loading bug for sync popup
* [GEN-153] - Fixed scaling bug according to worldsizes for objects in many cases
* [GEN-155] - Change physics values for worldsize from 230 steps to 100
* [GEN-164] - PhysicsBody will only be deactived for the localcar, not for the networkcas > collissions
* [GEN-171] - Increase sunkenTyre shape and collider
* [GEN-173] - Changed Gatesize and tests with Gate (still wrong size)
* [GEN-176] - Save audio setting volume for player and load it at the start
* [GEN-177] - Fixed Settings-Background Bug (clear hide of other buttons)
* [GEN-178] - Fixed Sync-Background Bug (clear hide of other buttons)
* [GEN-179] - Changed line transform for pitbox to ensure better visibility
* [GEN-180] - Handle trackfiles <version 1.2 (track cannot be loaded, scene switched back to main menue with message)
* [GEN-181] - Fixed camera-movement, zoom and perspective change if topdown-cam is inactive
* [GEN-183] - Changed jump down force behavior calculated following bezier curves

can the alpha versions be tested?
Top

I am closely monitoring this new 'gene-racing' project by Elharter. This will surely be what the generally community always wished for:
We have a person open for suggestions and ready to take note of the intersting features to be implemented. He is working hard on the project. I am seeing progress every day. I urge all the community who still play and love generally to follow and support this project. Hopefully one day we will all be racing online!

Just randomly found out, that there will GeneRacing, so my "GeneRally 2" if you want

I abstolutely love it! I remember how I found GeneRally like 15 years ago. And I'm not that active anymore, but damn, reading things like online support, more cars, day/night, how can I be NOT excited

Please keep up the beautiful work!

btw, is it possibly to be an alpha tester? or at least test one alpha at some point?
GeneRally Formula Grand Prix 2016™
Website
Forum
Top

zgr wrote:...And I'm not that active anymore, but damn, reading things like online support, more cars, day/night, how can I be NOT excited

Please keep up the beautiful work!

zgr wrote:btw, is it possibly to be an alpha tester? or at least test one alpha at some point?

I don't think I could bring any useful feedback, but if you plan on doing some big online test race, count me in


GeneRacing physics remake insights... which is planned for the next update 0.0.7j

Outlining added due to a user request:
https://www.youtube.com/watch?v=W-maZls8Xf8

Pictures are worth a thousand words...

Btw: There is a new dedicated youtube-channel, dont forget to subscribe