Tracks released on forum of RSC.com and lost by its crash(es). Reupload currently possible only by original authors and TR.

It popped up during random googling some weeks ago so I just had to check. Then found this forum and that RSC had gone down, taking everything with it. Saw that people from way back were re-uploading their tracks and went on a hunt to find my stuff. Had to go through a ton of old, mostly untagged backup CDs but last night I was lucky enough and found almost all of my stuff on a disk back from 2007. I started playing GR around October '02 after stumbling upon it during one of many graveyard shifts in the university library computer room. Started making tracks after a while - either Ellinicon or Trois-Rivieres was first, I don't remember. While most were flat like pancakes (sucked at hmaps) and made entirely with MS Paint, a lot of time, love and care was put into creating them - the often annoying AI drivers made me focus on driving lines above anything.

But enough with the history of my GR-life, please enjoy the tracks!

Track list, with a few comments (in alphabetical order, I don't recall their release dates and didn't bother with documentation - which was bad):
[rwl][cir] Anderstorp (Summer & Winter version) - mainly for fast cars, many of them have met their end on the wall before the final turn

[ovl] Gaixan - with safe pits from when it was used on GRASCAR, but with the improved AI which wasn't used for the actual race (still don't know why

[rwl][cir] Goiania - pretty small scale, for Formula and stuff - the 'S' before the final corner is wide enough for only one car, you have been warned

[cir] Hakken - get a fast car and watch out for trees

[cir] Hillfields - influenced by Strava, this one is for medium/fast cars - took some time and smoothed out the annoying cliff hairpin

[rwl][cir] Jacarepagua - usable by Formula, bigger cars might find some parts too cramped

[cir] Kaze - the sole reason I had made this one was to have a part where the GP68s would get briefly airborne, a-la Flugplatz, for some nice screenshots

[rwl][cir] Megara - a bit too wide, but makes for fun races (not really for slow cars) - surroundings are entirely fictional

[cir] Oerlikon - probably the longest track in the pack, has one of my best corners - fast, sliding car is fun here

[cir] Orchomenos - this track was planned but never built - I remember designing the line for some DTMs, though any fast car should do fine

[rwl][cir] Reims - *trollface on* made for Formula - maybe half a lane too wide, but so many trees to crash on at full speed (also an exercise on field-making)

[cir] Rezo - *trollface off* (forgot it from before) made for Formula - pretty tight and unforgiving, be careful on last corner - I had forgotten I had even made it, good thing tracks are incapable of feeling insulted

[rwl][cir] Serres - fictional surroudings, looks like someone got Suzuka and Barcelona really drunk and locked them in a room together

[rwl][cir] Thruxton - very fast, very simple to drive (as long as you don't hit the tyres) - drifting through the final 'S' and scaring the pit crews is always fun

[cir] Trammel (Normal and Reversed version) - yes, it looks like the A1-Ring (which is not very original anyway) - I put the hay bales on the top corner after trying and failing to make a working AI line for there and being too bored to redraw the track - some cars get airborne on the crests but since precision and full speed is needed, pick something with good grip (still fun hotlapping it in speedy-slidies)

[rwl][stc] Trois-Rivieres one of my oldest tracks, made it after reading about Gilles Villeneuve's '76 drive there - I'm pretty sure there is no straight covered in canadian flags you can drive on (probably punishable by death), but I remember some epic duels with my housemate using the CanAms (Strava's?), good memories

Bonus track:
[cir] Norburing (Normal and Reversed view version) - posted it as Kemono, made for Formula (probably the only one I ever made for it only) - it's a tight track, feels good getting a lap right here as it's more unforgiving than most of the others

Oof, that took me a while to write. I'll try to post whatever cars I could find in the following days. Until then take care all!

Re: Tracks by -cbfs- 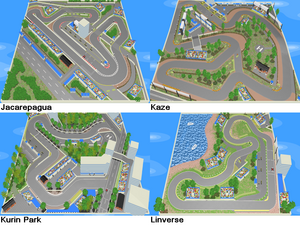 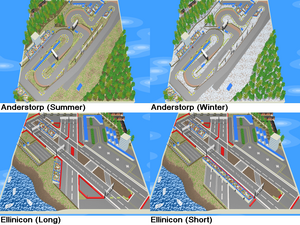 Re: Tracks by -cbfs- 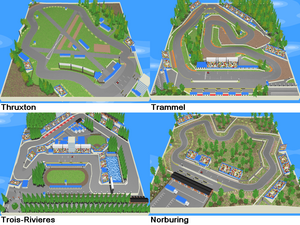 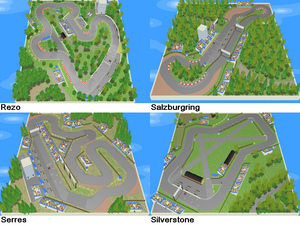 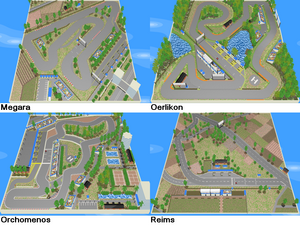