Tracks released on forum of RSC.com and lost by its crash(es). Reupload currently possible only by original authors and TR.

Nobody ever liked them, nobody waited for them, but here they are again: Westheim's GeneRally tracks. At least those that were not completely horrible.

I'm going to upload them bit by bit, whenever I feel like it, in small chunks.

One ounce of (late) acknowledgement: everybody who back in the day told me that all my latter back-of-the-woods tracks did look the same, but who I never listened to - you've always been right: they DID all look the same. 100%.

If you want to see anything specific, drop a line. If there are any issues with them, drop a line as well. I noticed that the zoom values set seem to work differently under Win7 than they did under XP (either that or screen resolution is to blame), and that on some tracks the very remote part in the back is off screen.

Anyway, here is the first re-upload, one of my two generations tracks (did we call it that way? I'm 26, memory's not as good as it was with 21...), the scenic [cir] Hills of Elmo, comprised of five tracks. First and last iteration pictured. If there was a story bundled with the set on first release, it has been lost since, I can't remember. (I know there was one bundled with Wolfshire, that one IS lost) 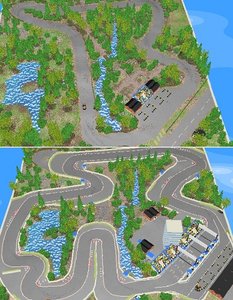 As we are on generations (or whatever) tracks, let's continue with [cir] Wolfshire.

Set in England, this gem develops from a disused airfield track into a twisting and turning adventure over the years, utilizing the neighboring hills to greatest effect (at least in my eyes).

There was a story bundled with the original release at RSC, but that has been lost apparently. If you still have the story, drop me a line. 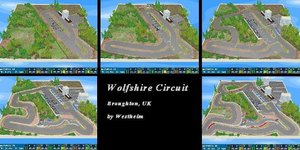 And here is the third bunch I have prepared for the moment: my contributions to the 12-track set we made for Fechna's 1976 car set. Some of these already look quite poor to me... oh, well.

By the way, I have been unable to locate either the other 1976 tracks or the car set that I loved so deeply. I would appreciate a pointer to the right direction.

I think, Rabenfels is where I deviated from mainstream taste - and never found back. (sigh)

Next is the Cities pack. Well, pack may be a little too ... big. It's only two tracks, and both are highly geometrical.

[stc] Antimon City is my favourite of the "pack", I think it has some nice flow with a fast section and a very slow section. It would be possible to create additional layouts, but I can't be bothered. [stc] Cumberland City is more dumbed down and only has one slow corner, in turn it adds an obnoxious chicane.

This one contains the tracks I am still most fond of after dealing with the stuff for a few days again, as far as they are not included elsewhere already.

It includes a few of my twisting and turning backwoods nightmares: [cir] Irish Wells, a highly technical track with a difficult back section, where one can lose tons of time, then [cir] Mount Malcolm, which is easier to drive and more forgiving and has alway reminded me a bit of A1 Ring, plus [cir] Landon Downs, which is the theme ridden as far as one can. I actually think Landon Downs is one of the uncherished beauties that have been made for GR. It combines everything from fast bends to narrow twists and some hmap changes that need to be respected.

The pack also contains two road courses, [roa] Olesian Heights, a very fast and demanding track in a (in my eyes) beautiful setting. The other is [roa] Zamardi, with a twisting up-and-down section on the western end of the lake, which has killed many a car. The ultimate test of drivers' abilities.

Plus, my only oval, which is not much of a true oval at all, but stop complaining already. [ovl] [cir] Ray World Speedway also offers an infield road course. 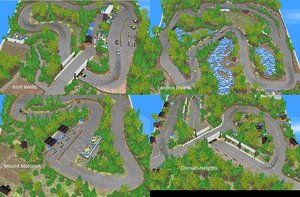 Back in the day, when racing was not for every softie, when trees grew next to the track and incinerable hay bales and fragile fences were the safety standard of the present, people actually gathered to race around these twisters.

[cir] Mid-West Viriginia, [cir] Ringstad, [cir] Sulphur Springs, and [cir] The Wildside all share this common theme. MWV and the Wildside are most compressed, adding the additional horror of claustrophobia to the nightmare of tree branches slapping you in the face every lap. Sulphur Springs strikes the same vein, but is overall a bit less twisty and emphasizes speed. Ringstad is rather open in design, but that should not let you drop your guard.

The Wildside's AI is in trouble in the first corner with very fast cars occassionally. Standard formula should be fine, though. 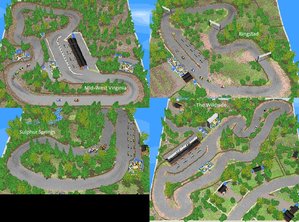 Here comes the Lakes pack. As the name very slightly hints at, all the tracks in the pack take place at/around lakes.

Included is [roa] Lake Justin, a highly demanding track with only so few corners, but somehow they are all somewhat nasty. The road away from the main road is extremely dirty and bumpy. The left hander atop the cliff is treacherous as well, while leading to an incredibly fast part of this killdrive.

[cir] Lake Berta is one of my favorite tracks (shouldn't it have been in the other pack then?) with a very narrow track that manages to constantly throw challenges at you. The two extremely tight right handers before and after the last straight are keys to a fast lap.

[roa] Lake Oran is much faster than it looks, and you should be careful on that wonky bridge, really. [roa] Lake Bell is one of my oldest tracks (of my second trackmaking stint at least, the first one was around 2004/5 and nothing survives of that), and it shows. Back then I tried to do dithering with yellow. It didn't really work. It is included for completeness' sake. 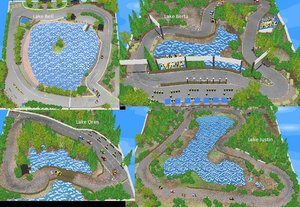 And here is the aptly named Hit The Road pack, with all road or hybrid tracks.

[roa] Simple Hills and [roa] [cir] Eichenwald are very similar in track layout: fast and flowing for the most part, with one or two tight edges to squeeze through. Both are unique in my collection for very different reasons. Eichenwald closely models (it tries to, at least) a real life road here in the area, with most of the top half including the descent into the village being modeled that way. I hardly ever did that, because the square maps don't lend themselves to it, necessarily. Simple Hills is the only track of mine that had actually living playtesters outside of, well, me before release. I finished that one while visiting some guys from a German board, but eventually none of them stuck to the game.

[roa] Secaucus Road is a very simple design with two hairpins connected by long twisting bends. It is more challenging to drive than it actually looks, despite an almost total lack of meaningful hmap.

The other three tracks all strike the same vein, sort of. For a long time I was obsessed with dirt roads as a small (or larger) part of my tracks. [roa] Martha's Vineyard may have been one of my better ToM successes, if I remember correctly. The hardest part was placing that bridge, actually. Also features a Le Mans style start, which is also unique among my tracks. It is not unique in my vain attempts to model real life places I have never been to.

[roa] Oblivionville is very fast with obnoxious object placement, and to be honest, it has fallen out of favor with me by now. But not the last one in the pack, [roa] The Balcony. The Balcony is your chance to be a man, right now, with six cars dashing down to the half-width-of-the-rest-of-the-road-with-concrete-walls chicane right next to the lovers' lane atop the vast meandering river valley. Might also be a spot to commit suicide. 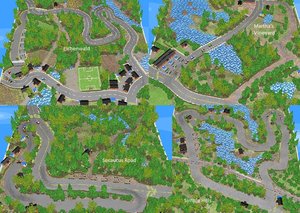