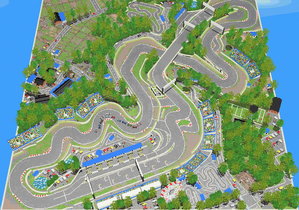 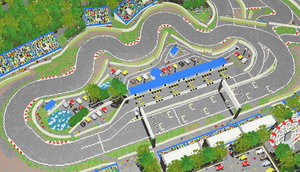 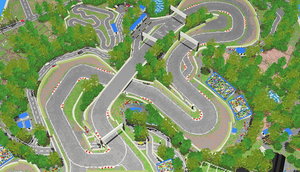 I can only say

I am the master of my fate:
I am the captain of my soul.
Top

You uploaded your track at the right time.

You're a GREAT track maker.

my tracks / my cars
Top

This will ensure you get 7 TOMs this year!!!

We will never be worthy or your greatness.

There was one problem I found, though. I don't know if this is the fault of the resolution I'm using (800x600) or not, but both of the short circuits were WAY too zoomed in, to the point that it took 10 points of zoom for the West circuit and 20 for the East to get everything visible again. Full circuit was fine.
Top

I actually didn't bother trying out the shorter versions until you posted that. Now I've noticed it too. It happens because of your aspect ratio(4:3) where as the trackmaker worked in widescreen, not so much the resolution.

I wish trackmakers would bother at least to check if their tracks work in 4:3, because that's what 99.9% of all tracks(and 100% before v1.10) were made for. It's a shame too, because this track is very good.
Top

Next probably will be Buddh.

It's too boring. All new track by Maciej1 I must comment very good as possible.

he means its starting to get boring that he's making such good tracks, hes being sarcastic lol

anyway its a great track, as per usual, although like your melbourne, i feel its rather out of proportion in places and looks a bit funny, although still clearly suzuka
G-TRACKS
Joint Effort Track Project
2015 GRIF F1 Prediction Game
My GeneRally
Top

Bouncebackability wrote:although like your melbourne, i feel its rather out of proportion in places and looks a bit funny, although still clearly suzuka

That´s what I like about your tracks.
They may not always look like a picture taken from google earth but they are very realistic to drive. Every corner feels like it should feel in reality.
And that´s one of the hardest goals to reach when making a rwl. Especially such a long one like Suzuka.-
Top
Post Reply
13 posts • Page 1 of 1