I was playing too with TE and some other tools, so if somebody has taste to try a smaller street track, here one is.

Story: When the St. George monastery in Perugia, Italy, burned down with rest of the city in 1836, its patron, duke Lambert of Spoleto, offered an estate outside the city to resettle the monastery and founded on original place the St. George Park, oldest public park in the city. The park soon become favourite place of relaxation and entertainment (thanks to e.g. regular performances of local regimental band) and kept its popular status 'till 1982, when bad financial situation and extensive floods caused bankruptcy of the city. Few months later the city council agreed to sell the estate to a Marcello Fumanelli, a local developer. No matter of his original promises to keep the park alive the trees soon disappeared and were replaced by concrete office blocks, the estate itself was even crossed by roads including new multi-level crossing directly in the heart of former park, where system of small ponds was located. In 1996 the area took attention of Italian F3 promoters, who were searching for a suitable place for a street track as a peak of their national championship. Even if they hope, that they successfully settled a tradition, which will grow once to fame of races like in Monaco, Long Beach or Macau, many citizens still have bitter feelings about the destiny of once pleasing place of placid picnics. 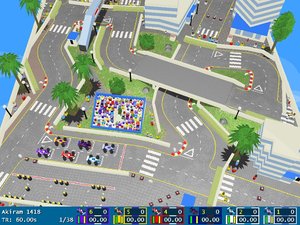 Ouh, I love this sort of street tracks.
It reminds me of Khole and all these tracks where it's harder to get into this kind of "flow" and you get the impression that you really have to work behind the keyboard to turn the car around the corners and not cause any damage.

But maybe this one is just a little too "driveable"

5/5
One does not make somebody feel obliged to comment immediately in every topic.
Top

Like you, Rudy, I like these small street tracks, but it's long time I've seen any, so had to help to myself and I'm glad you like the try too, guys.

Truth, it's quite comfortable for hotlapping, but have you tested if AI line is competitive?

I think stc should be like other tracks - quite drivable on its own and showing its teeth on drivers rather in moments, when they risk over-takings.

Remember me of some Aleksi's also great small street tracks, you are really good on it. Tracks like these really seems beautiful by a very first look we do.

For me it's really good in visual quality i found no failure here, didn´t race it yet though.
Try other tracks by myself: Agrestina -Tristar - Petra
Top

Aleksi's Taunoville, Kiquls-Ehab or Prodeezee are one of my most favourite street tracks too, I'm very happy, that this one reminds you his great tracks.

And don't forget to leave driving impressions later too, please.

It looks very nice. I like it a lot.
It is very fun and interesting to drive on it.
Great job.
I am the master of my fate:
I am the captain of my soul.
Top

And we have a mini compo 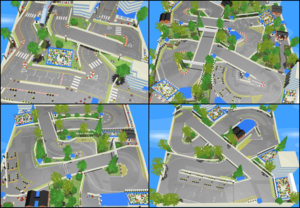 And we have a mini compo

Hell yeah! When is that compo going to take place?

Thanks for comments, cocney, Rudy and Mr.J.

I don't hope in making/finishing any track at least 'till late spring. And it won't be stc almost certainly.

Mr.J wrote:And we have a mini compo

I'm not sure, if the comparison really fits, I think, that I took the stc theme much more literally (streets with pedestrians, zebra crossings or other road markings) than Aleksi, Pahkasika or HJ did, so they are a different league.

I love the way that You take care of the details. I wish I'll reach that level of ingenuity and accuracy. It's one of my favourites. Amazing job

Really... I want also to reach catch this style, I can remember a non street circuit that have some similarities with these street tracks it's Aleksinir's & Disi!'s Japaree. I want to make something like tjhat. I have two circuits in the process to become like these...
Try other tracks by myself: Agrestina -Tristar - Petra
Top

Thanks for comments, guys, but I'd say, that it's rather me, who should learn from you.

Hm, no Truck-bug under the bridge? Very nice. IMO, the track has very little with all those tracks. Too few bridges.

It's rather nielske's Suzu or Ivo's Moore Belt. Fantastic one it is, EEO-style.

BTW, from what I see, Ivo should get the next trackmaster badge (I expect this since Avus). Don't bee too modest about your skills, Ivo.
Top

I keep my eyes opened.

Definitely nielske too is for me very inspirational trackmaker. Finally let's not forget other author of cute street tracks like BBA and his Michell Park, Las Cruces or update of WT Australia.

If in the end this track can stand without a big shame in same line with their efforts in your opinions, I'm endlessly happy.

after generally 1.1 finally work on my laptop, i started to test this circuit

very interesting track, for a streetcircuit the hmap is perfectly, nice job...this track reminds me a bit of moore belt, but its completly different, too.

fantastic...only one points...or better two...the pit-entry and exit is dangerous in my eyes...for example when two driver entry or exit
but lovely track, great job ivo

Users of other than 4:3 screens can feel bit more comfortable with the pit entrance.

Also if an issue, than rather related to its length (everything happens very fast - entering, choice of crew, parking, refuelling, driving through and leaving the pits - all in few meters), so we need to keep awareness about it all at once. But generally I think, that the width of entry/exit itself is quite OK - about 1,5 of formula and sunk tyres (not cones) on insides to help in critical moments too - if I compare its width with e.g. Otto's pit lanes at Futura Road or Alpin Bavara or majority of rwl tracks, it's not exceptionally narrow. But you're right, few more pxs of free space would be nice.