When I finished my previous track, which visually and driving-wise IMHO quite complex, I had taste to try something more complicated. And when the Wheldon's Trophy was announced no longer after it, it was clear - a small oval.

So the task was: a small and simple, but not entirely easy oval. Unlike to other ovals without many lmap objects with 3D-effect (cars on parkings, scoring pilons, advertisement boards etc.) and also without many complex textures, but rather with several large portions of plain colors and if best as few colors in lmap as possible.

I finally found some time to finish it, so here is for your temporal amusement the result - Carrford Raceway - a strange local short track somewhere in countryside of Maine, USA. It's quite old, paved and bean-shaped oval with low banking.

Note: Pack includes 2 versions - for widescreens (W) and regular 4:3 (N) resolutions. Choose the one, which fits better to your display. 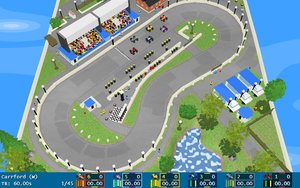 It's a nice, simple track with well placed objects and favours visual clarity. It doesn't make itself out to be more than it is. Good job.

I'm just not sure why you needed two seperate versions though. I tried both tracks on standard and wide resolution, and the difference was only miniscule, and certainly doesn't affect drivability.
Top

Simply that small difference in PoV in this particular case was for me enough big to disturb me from a reason, so I added 2 versions.

Any other impressions or ideas, please?

But the sunk tires kept p**sing me off

Exkakx wrote:
But the sunk tires kept p**sing me off

They are there to stop you

I am the master of my fate:
I am the captain of my soul.
Top

This is marvellous piece of true GR tracks. This one deserves to be included into some hypothetical new version of GeneRally instead of Kutford. I'm amazed how you put objects here.

Top job as every of your tracks.

So much praise for this small track?

BTW the credits for idea of the light-telegraph pole thing (meant here as loudspeakers of track announcements) goes to HJ and his Cyrano Town almost an year ago. Hopefully I wasn't alone, who noticed the good idea.

@ Exkakx: the sunk tyres ... cutting in the apex more than AI isn't the best way for overtaking here, you're right.

Y U NO MAKE MOAR TRACKS

SO SIMPLE, YET SO BEAUTY

(Also extremely fun to race on whether with big bad muscle cars or compact four bangers.)
"In my world, we don't have enemies. Only rivals.
In my world, our dreams become REALITY."
-- World Endurance Championship 2015 Promotion
Top

Thank you very much, guys.

I didn't count with a very positive reaction.

Thanks for great news, Glen.

BTW I finally tested the length too, somehow hadn't the idea before.

Trigger Happy wrote:I finally tested the length too, somehow hadn't the idea before.

I try most of my circuits with 100 laps races to see if they are ready for publication or just boring.

Try other tracks by myself: Agrestina -Tristar - Petra
Top

@ Primeracer: of course you can. Same like you don't need to ask the person, who first time used gates as roof above stand.

And like I told earlier - it is an idea born almost a year ago in HJ's head (link to his track few posts above).