Here is the newest thing I've made. At first it was meant to be an abstract looking city track, but somehow it turned out as a rally track in sandy jungle area (sounds bit weird, doesn't it?

The AI line has been designed for General, but it's also fun to drive Rallycar alone here IMO.

I hope you'll find it funny and enjoy it 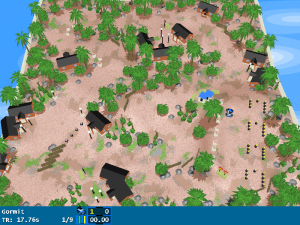 Don't take me wrong, I like it but it really reminds me of my track

Quite fun to drive

What a great track! I'm not sure why, but it reminds me current ''Dakar''.

BTW lmap is very nice, but it bit masks hmap, so I experienced some surprises in first laps, after those it wasn't so hard to race.

Thanks for your comments, Dan and Ivo

I realised today that I forgot to put people around the track. But it seems that it isn't a problem in this track

, otherwise I would have surely noticed lack of them earlier. This track looks like it's in a place where many spectators wouldn't enjoy to be, so that's why it doesn't really matter, whether there is people or no. At least lack of people isn't enough serious reason for an update, right?

Mad Dan wrote:Don't take me wrong, I like it but it really reminds me of my track

I think that it is more like a compliment, that my track is reminding any of your rallies

Your tracks inspire me always, when I'm making rally tracks, so it would strange, if none of them would be reminding your tracks. Especially because you have done so much of them. Btw, you probably meant Palmier, not Sable

So when is Wlalace coming?

The track looks nice. I'm gonna test it in a minute or two.
Do you have/need useful GeneRally tips & tricks?

Anyway, nice to see you like the track, Wouter

It's a Wallace and Gromit reference, he altered the letter order just like this track

Interesting track Emil, the only thing that I don't like in this track is the layout. I know it's supposed to be an abstract track in the wilderness but you're turning like 80% of the time, there's no time to relax...

Thanks, Luke, for clearing it for me, and Darjo, for commenting on the track

Darjo wrote:turning like 80% of the time, there's no time to relax...

Yes, you're right. It doesn't bother me, but I understand that everyone cannot like it. I wouldn't say that it's that much layout's fault, bumpy hmap and narrowness of some parts also causes that you can't relax, even though you are driving pretty straight.

Sure, I haven't been as motivated as now for a long time, so you can expect more coming soon (who knows how soon