Now is the moment, when I finally finished and 'd like to release my own version of so-called "New" Masaryk Circuit (Nový Masarykův okruh, Neuer Masaryk-ring). I recall quite correctly, when I started this track, because BBA released his own very decent version only a week later (June 2009).

It obviously had pretty devastating impact on my working pace.

Now in Decemeber, when I saw Areen's try, I got taste to continue, so I revised the wip and here the result is for my and also your pleasure.

Unfortunately neither of those two mentioned versions (or even older Jimmy's) was somehow satisfying for me in relation to own experience and memories on the place, so that's why this try. The zip includes two trks, one with starting grid for cars (C) and one for motorbikes (M). Although the track is IMHO not one of the easier pieces, I hope you'll like it. And ...

And a bit of facts: 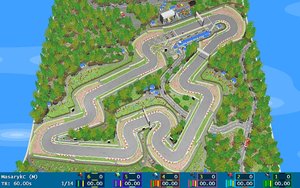 The AI line is smooth as silk and probably too good for usual GR player.

BTW, does your "new" remark mean you're making an "old" one too?

Much better than mine! Superb track, Ivo!

Thanks for comments, guys.

Buka, the ''New'' is mainly there to give clear clue, which of those you'll find inside the thread, also the track is commonly mentioned in that extended fashion at least in Czech media etc, however it occurs less and less often as awareness about any older course slowly vanishes away among general public. But about GR, yes, I still keep a hope I'll finish once the oldest layout, however it's not a matter of foreseeable future.

Man, awesome! Personally, it is hard to decide for me whose version is the best - either BBA's or yours. I'll get my fingers crossed that you will finish the old circuit.

I remember the time you started making it

. It really resembles the original, well you've been there and it looks like that