This is my new track called Autodromo Nazionale di Monza. I hope You'll like it 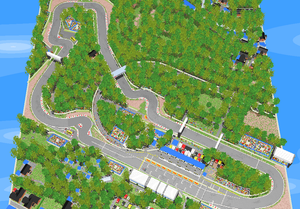 The picture doesn't show it, but on my screen the apexes of Parabolica and Lesmo 1 as well as the area before the Variante della Roggia are slightly covered by forest (I suppose it's just a problem with my screen/resolution...). If I don't fix it I'd need to consider moving trees a little further by myself, because this is definitely worth it since I feel I'll spend some time racing here. If I was to compare your version with Maciej1's, I'd say that visually they are both top class and both have some unique advantages and disadvantages. This version has slightly less sharp and distinct chicanes but still they definitely do their work so this is not a flaw. After a few minutes of testing (with different cars: F1, LMP, GT) I get the impression that racing here is 'smoother' than on other versions and it may be due to the almost perfect AI line - that 'almost' is because of the first corner where it could be a little closer to the kerb so the computer players wouldn't leave so much space for overtaking which is just too easy right now. Also I think you had enough space for 6 pit crews; I mean, 5 are generally enough, but having them all is very useful at times.
Apart from these minor flaws this is a perfect work. I'll need some time to decide whether it's the best GeneRally incarnation of Monza for me, but on first sight... well, this is my favourite.
Top

WONDERFUL JOB...I agree with the comments above, this is arguably the best version of Monza for GeneRally.
sorry for my spelling mistakes
Eu me achei no colo do meu par (Banda do Mar) SONG
I found myself in the arms of my pair (free translated)
My stats in GWR (thanks Jo.sk)
Top

Thank you, Marcinho, Lorenzo and Hermes for your opinions, I really appreciate it