Good morning, people. I've got ready the track I showed in WIP thread. It's quite a fast street track that goes over itself twice.

A lap on the track starts from a purpose built part, that goes over a bridge to the hills to the first tight corner, from where you'll soon come back to the city over another bridge. Then there's a double hairpin during the transition from purpose built part to the streets. Soon you'll drive to a 90° corner, after which there's a short straight before a small kink and another 90° corner. Then you'll get to drive on a long fast section through two kinks and under two bridges. Finally you've arrived back to the purpose built section and the last corner, which is also pretty fast, and then a new lap begins

When I was making the track, I had following targets: So, this track came as a result of following those principles. I wasn't able to fully follow the third principle, because I had to use bridges and I thought that continuing the walls from bridges with armcos didn't work well, so I had to use also concrete walls and then make smooth change from concrete walls to armco barriers.

The reference to Tenerife wasn't in my mind since the beginning. When I was making the beach, it brought Tenerife to my mind and then I realized how it's name has similar begining with Generally. I thought it would funny to mix those names and thus the track was named Generife

The AI line has been designed for original Formula. The AI line could be better, but I just didn't have more patience to work with it. Making the AI line was really a horrible nightmare. At least AIs shouldn't be crashing into walls apart from 1st lap, when all cars are packed close to each other.

I hope that you'll like it and also leave some comments 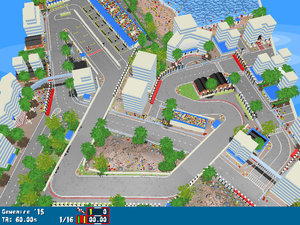 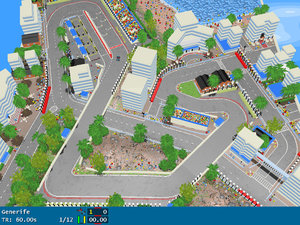 Top job Emil! Clearly a 5/5 track!
The textures and dithering on the bach and pavements look very, very good.
You also did a great job on the bridges. The transition from the road on and off the bridges is flawless, visibly and drivingly (is that a real word?).

Maybe you could have kept the whole circuit in the city rather than these hills or cliffs in the lower part.
But that´s just my opinion and the buildings probably would block the view on the track.
Top

). I have appreciation for the reasoning you had behind the name

Thanks for the comments, Scholl and Bif44

Scholl wrote:Maybe you could have kept the whole circuit in the city rather than these hills or cliffs in the lower part.
But that´s just my opinion and the buildings probably would block the view on the track.

I first tried some buildings there, but they indeed blocked too much the view on the track. Also, since the location started to evolve in the direction of being a holiday destination, I wanted this city to have a relaxed feeling and thus wanted to have some nature in the middle of the city. If the city would be full of buildings, it wouldn't look so much like a place, where people go on holiday only to relax and enjoy the warm weather

I like more street section than permament (starting from the bridge and ending on them too). It doesn't fit for me so well. However, whole track have some nice feel - I like fresh style of that.
Soemihi 2020 | Dustland 2020 | Lake Minnor Circuit | ALL TRACKS
projects left: 12 | Upcoming track progress: 40%
Top

Yeah, it's very good how masa say, but for me looks like Rio de Janeiro.
5/5

Thanks for commenting, masa and Np2003

Awesome! I cannot understand, how you could manage placing such a extensive layout (18.00+ sec with formula) into this under-average WS without any compromises of landscape consistency. Masterpiece!

Thanks, Trigger Happy and reynaldo123

Trigger Happy wrote:I cannot understand, how you could manage placing such a extensive layout (18.00+ sec with formula) into this under-average WS without any compromises of landscape consistency.

I don't really know it myself either. I just had a huge inspiration and it happened to turn out like this. It was a surprise even for myself that a lap on the track is so long, when I was testing the track first time.

At least for me a fictional track with this WS is clearly bigger than an average track. It has even been about 1 year and 4 months since the last time I released a track (Maorgarnn) that has WS 180 or above.
Latest releases:
Tracks: [ovl] Riabate | [cir] Yeavy | [mic] [ovl] Xandom ||| More at My Website
Cars: [cpk] Update of Original GeneRally Cars by Emil
Top

I made a 2015 version of Generife. Even though the track won ToM, there was still something, which I thought needed a change. When I was racing on this track, there were sometimes situations, in which all six cars entered the pits at the same time and due to the number of pit crews two cars had to leave the pits without refueling and tire change. On yesterday it started to annoy me so much that I finally decided to fix the problem by making a 2015 version of this track. To get more space for the pits I moved the starting straight to where the pits formerly were and moved the pits to the place of old starting straight. Now the pit lane is longer and it has six pit crews. Also the last corner became much tighter and I hope that it would make overtaking a bit easier. Scroll up to the first post to see a picture and download the zip.

Please, tell me, do you like the way I updated the track for the 2015 version.

I think you could make how the track would've looked in the 90's or 80's. Just saying

I made a new zip archive and uploaded it to the first post. I hope it helps.


ivaneurope wrote:I think you could make how the track would've looked in the 90's or 80's. Just saying

Not a bad idea actually.

Like your last version good, but this is better.

RobertRacer wrote:Like your last version good, but this is better.

Good to hear, because that's what I aimed for. Thanks for your comment, Robertracer