AleksiNir wrote:I am almost 100% certain that I will never publish another track.

Fortunately I said almost, since here I am again

While I haven't been making tracks for a while now, I've still been getting ideas for new tracks every now and then. However the effort required to actually create the track felt overwhelming so I never actually started making one. However, this time the idea I had was so simple and so clear in my head that creating the track seemed much less of a task. And indeed, building this track took me way less time than it usually does.

I had a slightly different approach to making this track than I usually do, usually I make the circuit itself first and then build a landscape around it, however this time I made the city first and then slapped a circuit on it. I think it shows, since the circuit isn't very impressive, but I think the city is of higher fidelity than if I would've done it the usual way.

The track looks best with 16:10 resolutions, so play it with one of those if possible. It's almost as good in 16:9, and there's also a version for 4:3 resolutions, but please avoid that if you can... 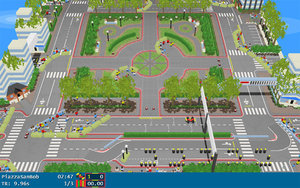 my tracks / my cars
Top

I'd not believe this is your track. Great surprise in many ways.

Trigger Happy wrote:I'd not believe this is your track. Great surprise in many ways.

Hmm, I know what you mean. It looks different from my other tracks, but I still definitely can distinguish it as a child of my own.

Thanks for the comments, Ivo and masa. I'm happy to hear that you like it.

You said "the circuit isn't very impressive", but surely it's very challenging, the AI line is competitive and the inside cones are very tricky.
Top
Post Reply
5 posts • Page 1 of 1