Next to the half year break in trackmaking, I'm here with new track. Now was time for Mount Panorama in Australia. Please test that and coment. 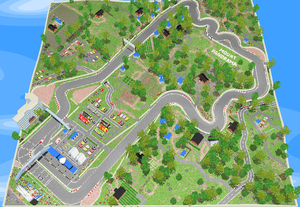 One of best track ever. Thanks Sartalas. I will nominate when some make thread.
Sorry for my English :D
Marcinho Motorsports :: GeneRally Championship Association
Generally Touring Cars Challenge :: Season 6
Top

Wi... will you marry me?
My career results
Top

Best Bathurst we ever had!

Thanks for coments and I waiting for next.

I'm proud that we have such a talented trackmaker.

I really like how you filled up the entire map, great job!
Top

@Areen: You should be familiar with the 30-day bumping rule by now.

If there is ever a general(ly) members meeting, first thing I would do is bring a motion in to end that dumb rule.
Why is it a rule anyway? You can't enforce it...

Let people be people and let'm share their enthousiasm, isn't that what the whole thing is about?

*waits for criticism*
To finish first, first you have to finish!
Top

Actually Tuomo and I were also thinking during past few days, how to relax this rule, most likely it'll follow 2 months of the ToM/CoM nomination period. But this thread isn't right place to discuss it.

I don't mind not discussing it further here, i'm already quite glad to hear it's being considered! I just couldn't help myself from b******ng about it for once.

I am curious to see where it goes from here! But for now, back to business!
To finish first, first you have to finish!
Top

Yeah I agree somehow with you Txizzle. Anything bringing some life to the fourms should be allowed in my opinion. #sorryfordiscussingithere!

Black Rebel wrote:Yeah I agree somehow with you Txizzle. Anything bringing some life to the fourms should be allowed in my opinion. #sorryfordiscussingithere!

As explained here, the rule has been updated.