Here's a new track from me to cheer up a little bit the Tracks forum, which seems to be less active nowadays.

It's been about half a year since my last track release, so I thought it's about time to finish at least one of my WIPs. Unlike three previous tracks of mine, which had WS close to 100, this one is a big WS 210 rwl-like track inspired by Qurpiz's works. The layout and Hmap are mainly based on Saozbe Raceway, the 4th track ever I released here (5 and half years since it's release! Can't believe it's been so long since my early trackmaking days). This isn't an update though, but a new track made from scratch. There are 2 layouts included; a long GP layout and a short one. 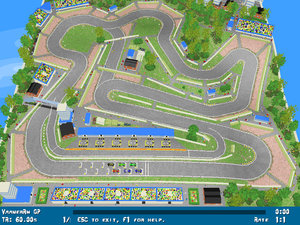 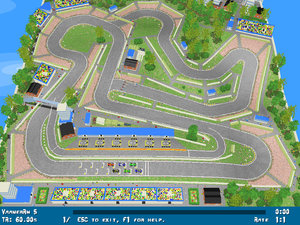 Hello to you too!

So I started making maps and cars for not so long (I actually created this account like 1.5 weeks ago) and I do feel that if all the other people are giving their opinions on my maps I should give mine to other people.

). I do really like the little details like the lining on the pit crew or the little gardens with flowers. I tested the tracks with a normal mini and one of my fast cars, and I do think that it is better to drive a slow car on the track. The AI also works perfectly.

I'm just wondering what external editing programs do you use to make the track?

Thanks for your comments, rooboty and Black Rebel

rooboty wrote:I'm just wondering what external editing programs do you use to make the track?

On this particular track I used GRHMEdit for making Hmap and GIMP (a free image manipulation program) for making layout and Lmap.
In many of my other tracks I have also used SnakEditor for making the layout.
Latest releases:
Tracks: [ovl] Riabate | [cir] Yeavy | [mic] [ovl] Xandom ||| More at My Website
Cars: [cpk] Update of Original GeneRally Cars by Emil
Top

I like a lot the short one, for longer version I'd rather turn to top right immediately after turn 1.

Trigger Happy wrote:I like a lot the short one, for longer version I'd rather turn to top right immediately after turn 1.

I also thought about an option of making a third layout, where there would have been a turn right after turn 1, but I decided to stick to having just 2 layouts, which would remind a lot the layouts of Saozbe Raceway. I did so, because I wanted to make a kind of polished version of Saozbe Raceway, in which the layouts wouldn't be too different, even though made from scratch and changed from few places to fit better into a non-fullscreen track, but the scenery, run-offs, pits, object placement and dithering would be more carefully made. I thought that making that 3rd layout would be against my original plan behind this track.
Latest releases:
Tracks: [ovl] Riabate | [cir] Yeavy | [mic] [ovl] Xandom ||| More at My Website
Cars: [cpk] Update of Original GeneRally Cars by Emil
Top
Post Reply
6 posts • Page 1 of 1