I just couldn't resist saying it)... 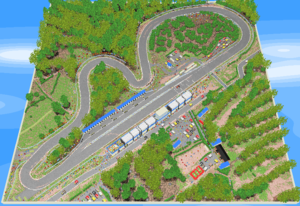 Very nice surroundings. The race track could be a bit cleaner I think.

Do you plan to do the current version of it? Would be nice.
G-Tracks - Real Life Gene Rally Track Database
Top

Black Rebel wrote:The race track could be a bit cleaner I think.

You mean the sand on the road or the track itself?

Black Rebel wrote:Do you plan to do the current version of it? Would be nice.

I Thought so. Mainly I used one picture of it, from the top, and it looked like sand/gravel stains (maybe very bright asphalt though). I just checked in GR how it would look like and I really liked it.

Then it is perfect like that, I thought it was a mistake. Full respect to the artist always.

I can't figure out if I'm playing GeneRally or Pole Position.