As a bit of a surprise (at least to myself), I've got a new track for you all. I might actually be making more of them in the near future as I enjoyed creating this one a lot, and I've got a couple of good ideas in my mind!

This is the second time that I've used the Volvo logo in a track of mine. If somebody were to know the other one, I would be extremely impressed.

For the optimal experience, please use a widescreen resolution and drive it with the original Formula.

I hope you enjoy it, and please let me know what you think of it. 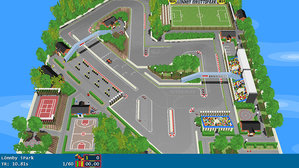 Superb circuit! I know it is not a RWL one, but can it be somewhere in Sweden perhaps???

Like a lot how clean it looks and the accuracy placing the objects. Top job.
G-Tracks - Real Life Gene Rally Track Database
Top

It's amazing, I can even count all objects placed at an angle different than 0/45/90 degrees.

And yet it doesn't look too forced or geometrical, nice effort - I can sense an inspiration and a touch of open-mindedness in your work.
Top

Thanks guys, I'm very glad that you like the track

Cleanliness and accuracy were things that I payed special attention to in this track, so I'm happy to hear that they've been noted. Placing objects/drawing the lmap in this way helped achieving it massively, as it made having everything perfectly aligned and placing objects exactly where they needed to be so much easier. In the beginning I was a bit worried, that it would turn out, as you're saying, Lorenzo, geometrical, but it did indeed turn out just fine.

The last part of Lorenzo's post makes me extra glad, since I've realized that my trackmaking career was/has been very lacking in terms of originality, as so many of my tracks have been more or less the same, and way too often I sought for inspiration from others' tracks instead of working by my own ideas, I mostly mimicked other trackmakers' styles instead of developing a truly distinctive style of my own and I never achieved much when it comes to innovation. Because of that, I feel that I'm not quite done with trackmaking, after all!

And I feel that with this track, and Piazza San Bob, my previous one (which was 3 years ago

), I've taken huge steps towards improvement in all that.

I'd love to hear more thoughts on this track!