It's time for a new track!
I want to present you Dustland International Circuit - 2020 version!
Honestly, as I mentioned in W.I.P thread, it is "remastered" (quite buzzword, isn't it?) version of one of my oldest track, but one of the most interesting layout, too. I felt my skill were poor that much it was destroying all of the magic of this cirucit. So that is why it is rebuilted.
I think the only place that wasn't touched was pit lane and S/F line (without some tarmac dithering, but still practically nothing), so I can also say there was really huge transformation. Hope it helped, I re-worked practically all of the lmap, corrected hmap etc. I think you can feel my style in this track, too

Maybe somebody remember it, maybe not, but I wrote I won't make any more remakes of my old tracks, but I changed my mind, so practically every track before KaisenRing will be refreshed, meanwhile I will make some new ones

Hope you like it, and please wait for next projects!
Bye! 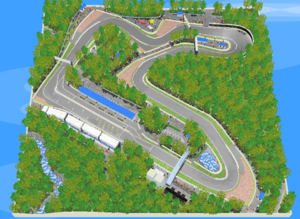 Each time someone makes a remake of one of his track, I'm eager to see the differences between the old and the new, as it's always interesting to see the progress of an artist-creator, and of course to comment on it.

So I'll make my best to review your track comparing it to your previous one.


The old Dustland :
While waiting for the green light, I had time to study the layout of the track ; what appealed first to me was this banked curve on the north east. It's like a part of a rollercoaster and I always love those entertaining sections.

But while driving, I found the entrance of this corner difficult to engage as there are trees hiding it and it's difficult to leave it, as there are other trees waiting for you to hide your view on a gentle chicane.

Another surprising matter was those big gaps between walls and layout which were not covered by sunk tires or hay bales, and with no sand to slow down drivers but grass, which allow some good "cut the cheese" corners like we said in France. Big gaps also between walls, but it's more a visual annoyance that's really little at my eyes. Some corners at the end of the track are like they were cut by an inexperienced butcher and it was weird driving those sections.

Scenery, despite some previous comments, was not shockingly bad. It was ok. No complaints about it.


The new Dustland :
After the renovation of 2020, I came back to this track and the first thing which caught my eyes was the scenery. It was entirely redone, with lot of details everywhere ; rocks along the river, wooden stands, some sun protection for the already built stands, emergency vehicles (loved this big yellow construction machine) and smooth, smooth everywhere ! Smooth lines, smooth walls, really appreciated !

Looking the layout by itself, gaps between walls and layout was diminished but there's still some gaps in some corners with grass (a little, as there's hopefully more sand to slow significantly all the Dick Dastardly and Muttley racers) and without sunk tires or hay bales. I really don't know if we can gain a significant advantage cutting them, but it may be minor.

No sunk tires on some corners which allow them to be pretty dangerous with drivers brushing the walls, or allow some easy cutting.

There are always trees which blocking our view but fortunately with less impact than previously. It's clearer now and add a little touch of challenge. Also smooth lines of the layout are a pure delight compared to the previous ones, and add a very pleasing, flowing line at the end of the track.


No more variants of this track but this remake is so well done, that it makes unnecessary any alternative versions of this track. Maybe for rwl tracks we may be more demanding, but for fic tracks it's ok. At least for me.

So thanks YoNnie to keep up your good work for GR and sharing it with us !

Well, at the beginning, thank you Kikwik for you massive support and constructive comments! It warms my heart

So, one of the best skill I learned is creation of smooth lmaps and objects (in lmap it's just practice, in objects - I recommend GHRMEditor and sometimes Snakeditor) and making scenery more.. Real. That is why I want to do remakes of my old tracks.
The thing with the "free" corners is I follow the rule that if somebody want to play dirty - fell free. But if somebody want to make skill in driving in the right driving line - he won't make track cutted. Trees were a little problem to make right balance between good surroundings and good visibility but I think I did my best. And with more variants, old one were... harsh? Messy? Unpleasant, that is for sure. I was thinking about making a short layout, without banking part, but it is a essence of a track a bit so I left it as you can see.
I hope I dispeled doubts about my decisions

Hope my next track will be released this year, but I can't be sure about it.
And thank again, Kikwik

I hope I dispeled doubts about my decisions

Absolutely ! I didn't understand before but now it's clearer, and I gladly accept it.

It warms my heart

I know as an artist, the importance of having some feedback on our work (and constructive ones, not only "It's really good !" or "It's so bad I'll vomit !"). We want to know if it pleased the others and if not, what to change to make it better, to gain more experience or to please them... or keep it like this because we love it so much this way or because we want to do something else.

Plus we always had a good relationship between us about our tracks (even if we are from different universes in trackmaking), and I appreciate more and more this kind of track and so your work, as I race more "professionally" on it those days thanks to competition.

I'll start by saying that this is the first time in years I've hadd a race on someone else's track than my own - have been hotlapping on some old tracks this week though.

The track is absolutely gorgeous, everything in its right place. I especially enjoyed that banked corner but the track flows smoothly in other places too. I came here to say about the "free" corners but I totally understand your point of view. In fact, while driving, I didn't feel the urge to cheat anyway and I think only the S after the banked corner is a place where one might need a sunk tyre. The AI isn't as strong as I would like but nevertheless, I think this one's a keeper - and you can bet I've seen so many tracks that a keeper these days really requires something.

Thanks TuomoH! A positive reaction form such an experienced and awarded trackmaker makes me honoured!
Back to the free corners - I was considering this move and I will stay with my explanation.
I am satisfied with a "smoothness" of my style. It was the key to make my skills better. Also, my old tracks are simply ugly - maybe with interesting idea, but bad implementation. I'm glad it has changed and right now it gives pleasure for ya