I set myself the goal to finally finish and release some of those many unfinished tracks I have in my folder. Shame on me, I noticed that this will actually be my first released historic rwl track

Anyway, here is my version of Warwick Farm Raceway. It's an australian racetrack that was active from 1960 to 1973, next to a horse track (Seems to be a thing, right? It's the same with the still active Sandown Raceway). It hosted some events of the Australian Touring Car Championship and the Tasman Series, as well as some Australian GPs. Otherwise there are a lot of pictures with early 60s open wheeler cars and production cars. This version represents the track's state around 1965. In 1968 the pitroad was seperated from the start-finish-straight, so it's certainly earlier than that.

I recommend to race the track with the GT legends cars (if I'm correct, those were made by J4ber. If you want to use those cars, contact me), more specially Mini Cooper, Ford Mustang, Lotus Cortina and Jaguar Mk. II

The AI line should work well for them as for the original Formula. 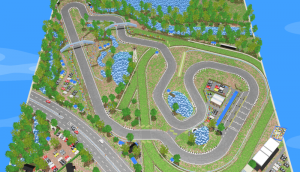 I'm truly stunned by the detail. More so, how much it actually feels like the actual venue, at least from what I've seen in videos and photos (and limited in person)

Did a good test with some Formula and they were actually really tough to battle so fantastic job there.

The actual circuit itself is really fun too, huge fan of everything from the hairpin to the "lakes". I feel like this would be an absolutely killer layout in a modern context so it's a bit of a shame it didn't last but just Sydney things

The only thing that was slightly frustrating is the corner just before the bridge, that armco is precariously close and I got caught out on it

I can't really think of anything much to say. It's a really solid track that I absolutely recommend

Side note, it feels so weird to see the (former track) location that I probably visit at least once a week in the real world in GR (that or Paramatta Park tbh, which will be awesome in GR

Ran this with the AI and some of Jerrecs old 65' GP history cars to really enjoy the historical drive. Great job!
Top

Thank you guys for your comments. I'm happy that you all like it! Interesting, that you know the real site Crowella

Yes, that armco wall is really close but I made it in this way, because it has been like this in real life, plus it's the only sector of the track which punishes you a little bit harder for your driving mistakes

Good to know that I nailed the surroundings, I also did some good research to find out about every possible thing (That might also be a reason why I didn't finish tracks for such a long time, I don't want to make wild guesses about the scenery but sometimes there's no other option than that).

Apart from that (If you have any hope I might do it one day), I've never even considered making the Paramatta Park, so you have to create it by yourself

Finally found time to test this one. The track looks very good and I've got nothing to complain about that. The layout is a bit boring to me but that's a problem I often have with [rwl] tracks.

You've done great job in making the track feel like a GR track first and rwl second, not the other way around, and that's a plus in my eyes. Finally, the AI is competetive. All in all, good job, hope to see more works from you.