Paahde is a short circuit located in a desert area. It's got four proper corners but the two "straights" both have kinks in them. Furthermore, there are hmap changes with the start area being higher than the rest of the track and one of the corners being banked. Again, it's 100% made in Track Editor. This time I wanted to try even more minimalist style than usual. The AI has been designed for the original Formula.

Track updated on 25.03.2021 - I wasn't satisfied with the track and after the comment by XYY, I decided to redesign the track. I took the layout, some of the objects and parts of the original AI line and remade the rest. The old version is included in the zip.
[Original version had 18 downloads.] 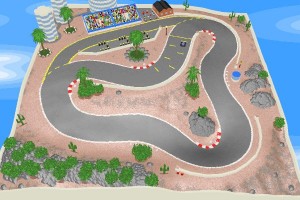 Ran a few races on this and it's a very fun track. HMap is smooth although I definitely got tripped up a few times after that second turn. AI seems to play nice too. Thank you!
Top

Cool to hear, thanks.

To be very honest, I think of the latest tracks which you made this is the weakest...

It doesn't look very stunning (ok, I see that you aren't exploring the limits of the TE with these tracks as much as it's possible or as other people did), and also I think the objects look pretty unrelated to each other (I'm not talking about the "nature" here). The only area which seems to "make any sense" is the top-left area. I think that the booths and the lights, as well as the multi-boat object (is it meant to represent anything in particular?) don't really make sense or have any particular meaning/context to the rest of the track.
Also most of the ground is filled with sand. Of course I think this is part of your minimalistic approach, but at the same time it makes the track pretty boring to look at. The road surface itself is quite bumpy, one can even tell from the screen, but I feel it doesn't make a difference in a positive way.
Lastly I was surprised by how slow the AIs are (compared to your other tracks), I made a heavy mistake in one of the first laps but still finished first in my 10-lap race.

Sorry, I'm not a big fan of this particular track...

I´m not a fan of only TE-tracks in general. But I appreciate the time and effort it takes to make them as nice and tidy as you are able to. However I think that that if a trackmaker puts as much effort in paint/gimp e.t.c. as you put in those TE-only tracks the overall outcome would be better.
The Track editor has its limitations. And if we have the chance to use simple programms like paint we should take it.
That´s the beauty of Generally-trackmaking. You don´t need fancy 3D programms or photoshop skills to make good tracks. All you need is time and dedication for that pixel-work.
Top

The track has been updated, see the first post!


XYY wrote:To be very honest, I think of the latest tracks which you made this is the weakest...

Thanks for your honest comments, XYY.

I admit that I rushed with the original release and I actually agree with everything you said. I wasn't satisfied with this track since the release of Vihervaara and had been thinking about updating it. However, I kept saying to myself "you never update tracks, why bother?" Now with your comments I thought that since it kept bugging me, why not do this track justice. Hence, the first update due to comments since 2003!

Exactly. That's why I've liked to use it so much recently. It has re-lighted my love of making GR tracks.

Scholl wrote:And if we have the chance to use simple programms like paint we should take it.

I have to disagree with this. We shouldn't do anything we don't want to. If one feels like making Track Editor only tracks, then one should do that. The key is to be true to yourself. I wasn't true to myself with this track but now I'm happy with it.

I agree. You can also make cool tracks without any external editors.

Btw, I'm not planning to release many TE only tracks in future. In fact, I've got quite many GIMP tracks underway already.