Hey there, It's me again after a few years with a small street track called Backstreet.
It's called like that cause I'm back, alright?

I wanted to make something characteristic with the landmap but it was really tricky to make it work while also keeping the track playable and fun to drive. The corner on the left with the pedestrian crossing was especially tricky to make so that you don't jump on it or hit the wall BUT Height Map Editor by Mlynki saved the situation.
Also big shoutout to Garbre for the landmap pack and Von Mantov for the perspective landmap.

Countless hours of listenning to 80's music were spent while dabbling in the editor.
Keep in mind it's a very hard and narrow track, so I recommend playing on time attack, or with 1 bot/human player because there's not much room for more cars.

Though, I encourage to try to drive it with the original General without letting go the gas button on the corners. 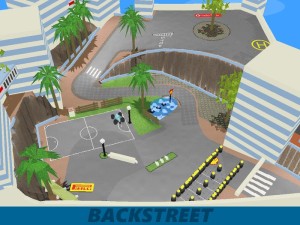 A bit chaotic because of the same route used up and down. But small tracks are almost always a bit chaotic to race and that's just part of the charm.

I was 100% sure based on the thumbnail that there would be a jump to get down. Was very surprised to see my competitor head back the same way he came, just as I drove right into the armco like an idiot.

I like the timelapse, shows that I'm not the only one going back and forth between ideas and just experimenting a lot.

I really liked the black-ish pavement seen in the time lapse and in the picture you used in the preview topic. Definitely use it in some other track.

Uhmmm, more info on this please. Seems like I've missed something.
Top

I was thinking about turning it into a stunt track with a jump! It didn't drive very well though.
Thank you for your comment,

surely I'm gonna make timelapses for my each of future tracks from now on, I like keeping different versions while trackmaking. I sometimes loose an intial idea of the track in the process of adding/deleting some objects, this way I can go back and find out what worked what not.

Here are links to these landmap packs, I think they're very useful

viewtopic.php?f=8&t=4070
viewtopic.php?f=9&t=110
I'd love to see more texture collections like these, I don't have any other ones prepared to slap on my tracks
my workshop
Top

BRIX wrote: ↑Sun Dec 05, 2021 11:28 amI'd love to see more texture collections like these, I don't have any other ones prepared to slap on my tracks

I have a couple grass thingys ready but I usually just create a new one for each track. Just very basic and random.

I like how in the "How to make landmap objects" tutorial he explains the perspective very specifically, but then it jumps between pictures 12 and 13. I had worked the perspective part out on my own, but would've liked help getting from pic 12 to pic 13.

It's just like that "draw the rest of the owl" meme

But nonetheless it's nice to have these things to help. The landmap pack especially is very nice to have. So thank you and thanks to Garbre

Thanks for bringing something different to the forums. I'd say [stc] isn't correct tag though, this is clearly an [oth].

I like how this looks and the timelapse is fun to watch. Personally, I'm not a fan of tracks where there are head-on collisions but we definitely need well crafted tracks like this.