I start year 2022 by being forced to isolate making an oval! This time for the next GRASCAR season starting very shortly.

It's the paperclip itself, Martinsville Speedway, loctated in the state of Virginia in the United States of America. NASCAR fans, eat your heart out, time for some loose setups, second gear action.

This track actually has something I'm not entirely aware of that has been done, which is, someone made a mistake and made the track too close to the edges again, but, with some sneaky um, hex editing, we now have stands that go all the way around

(thanks dzamper for testing out if it can be done)

AI is for Formula because of course it is.

Enjoy "The Augusta National of Race Tracks", "Half Mile Of Mayhem", whatever you want to call it! 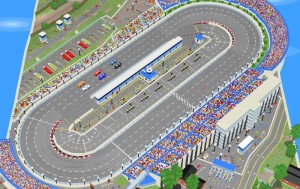 A dive in the past.
It's very nice, above all the paddock area and the tarmac lines.
Excellent.
Latest release:
Kentucky Speedway
Richmond International Raceway
Pocono Raceway
Iowa Speedway
Top

Like Black Rebel, love the little details ! Was there an accident on the track ?

(red splash near the start/finish line)

Appreciated the little trick you used for the stands standing outside the track, with the help of Snake Editor.

Helps to have more place for the track itself, the layout.

I like it as it's not too big to race on it, and because it's really tight. Nice little oval.

And it worked well as well as a teaser too.