I'm presenting you my latest creation, a pack of cars from the swedish TTA series 2012 season. It was the first, and somewhat - last season for this championship. It started as a breakaway series from STCC, where teams organised thier own racing league because of too high costs of maintaining the S2000 and then upcoming NGTC cars. Both series ran simultaneously through 2012, and after the end of season an agreement was made, to use TTA format as the STCC from 2013 season onwadrs.

The cars are silhouette models, similar in concept to DTM (but, of course, much less advanced and less powerful). Because of that the series was criticised for being "fake cars racing" and having no relation to road-going models. These cars are made by Solution-F, alike in belgian BCTS series. They got 400+ bhp and weigh about 1100 kgs. With same chassis and their areodynamics equalised, they have very similar parameters. That's why I've made their stats equal.

If you want some more information or would like to see some pictures, visit their website: http://ttagroup.se/en/

There are 4 models in the pack, namingly BMW M3, Citroen C5, Saab 9-3 and Volvo S60 with multiple liveries from the teams.
I'm asking for comments about the physics. They follow the same way as my previous release - GT Pack, so they are rather slow-turning than drifty. I may make more packs based on that physics, so I would like to know if you like it or not. 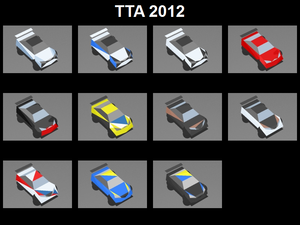 Yay, I have been waiting for these
Co-creator of BTCC 2011 and BTCC 2012 by Herbal; Themed Formula Packs (in collaboration with Np2003) with Lukeno94 car.
Founder of International GeneRally Racing League (IGRL) with zgr and Np2003.
Follow Ivaneurope Motorsports at: https://www.facebook.com/IvaneuropeMotorsports
Top

I love those cars, fast, but drivable. Very pleasant!
I always drive with the yellow C5, was one of my "random cars" test car for the AI line of my last track. (Ms. F1 cars too)
Top

Thanks for releasing, I appreciate that.

And yes, these cars look gorgeous, not just only the RL ones