EURO Eurasian Ultimate Endurance Championship
The ultimate trial of Endurance in Asia and Europe.
Discipline: Endurance
Categories: Super Prototype & GT Endurance PRO (Tier A)
EURO = European Union of Racing Organizations
Category Introduction:
Curiously, despite the common perception among the public, not all Prototypes are built to contest for overall victories. As the penultimate step in the Endurance ladder, the Super Prototype class has been a mainstay for over three decades in different forms. Essentially a 'lite' version of the higher-up Works Prototype cars, these little siblings fought every bit as hard as their bigger Works counterparts for class victories. The class is highly popular with small, underdog race car constructors with Endurance aspirations but nowhere near the budget to compete at the top level, and the story is the same for many of the teams who compete in this class.

The class is almost exclusively targeted towards privateer teams, with a common cost cap, technology equivalency balancing, and yearly-only homologation updates. Like GT Endurance PRO, these measures were introduced to prevent the power wars that plagued the Works Prototype and GT-E PRO categories for decades. As a result, the class is frequently chaotic and competitive for consisting almost entirely small, private constructors.

Series Background:
The Eurasian UEC has been a mainstay in various forms over the decades of Endurance racing since the 80's. First introduced as an all-Prototypes series just before the popularity explosion of what is now the RETRO Works Prototype class, the series toured many of Europe's finest and most grueling Endurance races. Despite suffering numerous cost escalation wars over its lifetime, the series has weathered out the storm time and time again. It first introduced GT cars to the series in the 90's after the Works and Super Prototype classes were reformed, and has maintained a mix of Prototype and GT cars since. Despite the long races, the series is hugely popular with sports car racing fans from all over Europe and Asia, and winning here has often proved to be a huge boost of popularity and sponsorship for all involved. 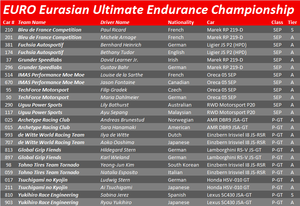 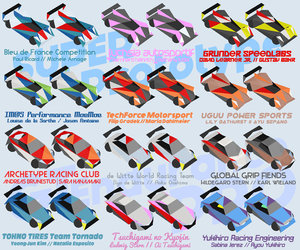 adimetro00 wrote: So Einzbern AG's works would be an analogue to Porsche? Like RUF is to Porsche?


adimetro00 wrote:What's the nationality of the Company anyways? Judging from the drivers and the names, it's probably German. or Dutch.


adimetro00 wrote: So the Formula's been done with. Now, how about LMPs?

A few others have been waiting for Prototypes for a while, so yes

I'd love to but no. The circuit racing branch of WOR is big enough as it is!

SoonTM. The big problem here is that not every class has been finished or even started on yet. For reference, the base packs are all in the following states, in order from highest to lowest tier:
DONE: IN PROGRESS: NOT EVEN BEGIN:
"In my world, we don't have enemies. Only rivals.
In my world, our dreams become REALITY."
-- World Endurance Championship 2015 Promotion
Top

IMAS Ultimate Endurance League of the Americas
From America to Brazil, the best Endurance teams of the Americas come together for the ultimate showdown.
Discipline: Endurance
Categories: Super Prototype & GT Endurance PRO (Tier A)
IMAS = International Motoring Authority of Sport
Series Introduction:
Though primarily an American series, the IMAS-organized league has seen competitors from all over the globe do battle over nearly three decades of competition. Unlike its European counterpart, the Eurasian UEC, the UEL of the Americas was originally a GT-focused series, based primarily on the American GTX-A class of regulations. Prototypes were added a few years after, and it's said that the very late 80's was the peak era for this series. Despite a decline in the late 90's, the series has come back strength-to-strength in recent years, and many international and works support teams are coming back to the championship. Though it still has the stigma of being the "fat slob's UEC", quite a few of the Global Endurance Masters' champions have proven their worth here first.

The Cars:
Please see the entries on GT-E PRO and SUPER Prototype here. 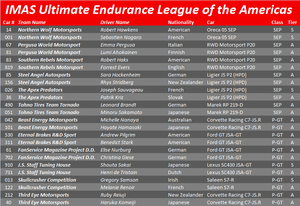 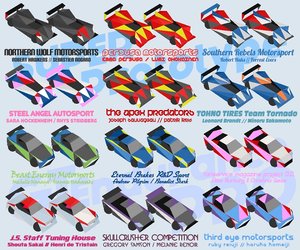 Re: [gtc] [for] Haruna's World of Racing; NEW! American U-En

Hey, You mashed LMPs and Gt cars together! This will be awesome!

by the way. next time make a guy named Balert whatever. it's a Choro Q reference.
Top

Re: [gtc] [for] Haruna's World of Racing; NEW! American U-En

I just read a few of my previous posts and realized I did something infinitely stupid. The actual Ultimate Endurance League of the Americas car and track packs have now been posted. Before that, I ended up uploading the European Ultimate Endurance Championship files TWICE!

Everything has been fixed now, so please re-download the packs if you're still interested in the series!

"In my world, we don't have enemies. Only rivals.
In my world, our dreams become REALITY."
-- World Endurance Championship 2015 Promotion
Top

PARC Saikou no Taikyu Challenge
Strategy reigns supreme in this test of Endurance.
Discipline: Endurance
Categories: GT Endurance AM (Tier C)
Category Introduction:
For many years, the PRO category of Endurance racing in Asia has stayed strong, with legendary battles and crowd-pleasingly spectacular machines, and it would be a tradition that would soon take hold in the Americas and Europe. In the early 2000's, the GT-E PRO class was made a global category, with local variations being prohibited. This stabilized GT Endurance racing at the top levels immensely, but the AM category had never experienced similar levels of stability in any form other than in name. Every two or three years, the class suffered "category upgrades" and numerous rule changes to please various manufacturers. In 2009 this would turn against the World Racing Authority's favor, as the class would burst from a global-scale boycott from various teams and makes involved due to rapidly skyrocketing costs to manufacture and maintain the vehicles. Sound familiar?

The World Racing Authority needed a class to fill the gap above the Clubsport GT cars, which could not effectively prepare drivers for the GT-E PRO cars on their own. This new class had to be affordable to teams who could only afford yearly - if that - upgrades, and manufacturers of diverse backgrounds and philosophies. It needed to be a class where a manufacturer or tuner could come in, and fight fairly right from the start. Though the new GT Endurance AM was initially just Clubsport GTs in carbon fiber wrapping, fender flares, and a bit more power, they quickly evolved into the super-tuned super cars we know today. With a cost cap effectively averting teams from massively over-investing to gain huge advantages over others, the class is now nearly every bit as awesome as its PRO counterpart; exotic machines loved by super car fans all over the world, rising stars from all over the world, and a heavily rejuvenated interest in Endurance racing as a whole.

Series Background:
The Supreme Endurance Challenge is a series that can be said to be the meeting point between traditional Endurance racing teams and Pro Tuned tuning houses; with the cars being easily related to by fans on both sides, many of the teams here use the series as a springboard into higher tier series in both disciplines. Due to the popularity of the modification scene in Asia, the entry lists are often overrun with teams hailing from there. Though it is a stepping stone series to the J-SA GT Masters and the PARC Super Modified Masters, the competition is even fiercer here due to so many cars being potentially competitive. 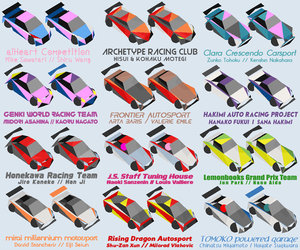 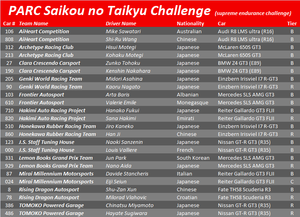 PARC Asia-Pacific GP-C Trophy
Speed and consistency must be together as one for this series' winners.
Discipline: Grand Prix
Category: GP Division C (Tier C)
Category Introduction:
As the first tier in truly professional Grand Prix racing a driver will most likely climb through in his or her journey to the World Driver's Grand Prix, this is a category that has taken many different forms. Its cars are often a period piece to top-level GP cars of the era, and a casual fan will often say they look like a "baby GP car". Highly popular among driver development programs for large teams, the class has served as the crossroads in which nearly all of the disciplines cross over.

The category has traditionally been strictly a "spec" series: with tight controls on engine size, type, dimensions, and so forth, teams must often rely on their drivers for success. This is a big part of the cross-disciplinary appeal; drivers looking to prove their own worth often venture into a GP-C series.

Series Background:
The Asia-Pacific GP-C Trophy has traditionally been a league targeted towards younger drivers looking to fight their way into a J-SA GT Masters or the Super Grand Prix (now also a part of PARC). Teams from all over Asia looked to this series to pick out potential future talents; the level of competition between them in the late 80's bred drivers like current Japanese Endurance racing legends Haruna Tsuchigami and Sora Kuroi, both who started their pro racing careers here as an example. That was back then, however; in recent years, the series has taken a huge downfall in reputation due to numerous Super Modified drivers setting up shop in the GP-C Trophy and using the series as their personal ego-feeder. In particular, the last ten years have been dominated by Barry Armstrong, who won the championship for nine straight years (he finished 3rd in his first season). 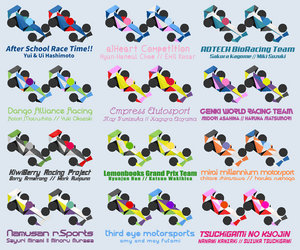 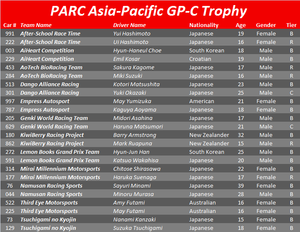 No. All World of Racing series are fictional, even though the car packs feature a variety of real-world and "realistic fictional" vehicles.
"In my world, we don't have enemies. Only rivals.
In my world, our dreams become REALITY."
-- World Endurance Championship 2015 Promotion
Top
Post Reply
34 posts