This topic was originally named [oth] Emil's Onewheeler. Since I decided to make my own interpretations of other original GR cars also, I thought it was better to rename this topic and release the new cars in this same topic. To find presentation and pictures of General and Triangle, go to post #4. To download the new cars, download this zip here:

The new .car file includes also earlier released Onewheeler, so if you have that already, you can remove it's file after getting this new .car file.

I've made an own interpretation of Onewheeler. In my version I tried replicate the vehicle seen in this picture:
The attachment Emils_onewheeler_inspiration.jpg is no longer available
It was pretty hard to implement with only 30 vertices and 40 polygons and I had to leave few things out of it, but I think that I still succeeded quite well in making it. The car has same physics as the original Onewheeler, but it's X and Y values are different, so it acts a little bit differently because of that. 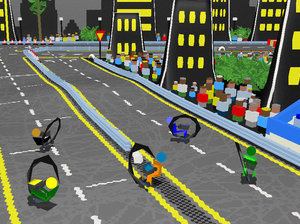 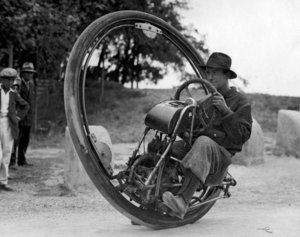 Re: [cpk] Update of Original GeneRally Cars by Emil

I was getting some ideas for new models for original GR cars, so I felt that maybe I should also make my own update of original GR cars. I thought that instead of posting individual .car files here I put in the first post of this topic a file, in which I have included the 3 cars that are ready and which I update, when I release new cars, so that you don't have to store several car files on your computer, but instead you can just download the updated .car file and remove the old one, so you'll have all these nicely in one file.

Today I'm presenting two new updates: General and Triangle. The model of this General was based on Donald Duck's car, the legendary 313. It's quite far from a perfect replica, but I think that it can't be done much better with only 30 vertices and 40 polygons. The model of Triangle was made purely based on my imagination without any example of how the final product should look like. I had already made one model of a tricycle, so I tweaked a little bit to make it fit size of original Triangle.

BTW, I don't remember seeing any earlier attempts at Donald Duck's car. Does anybody know, if someone has already made it, or am I the first one make this car?