The Forgotten - Hidden Gems of GR

General discussion about your experience with the game.
Post Reply
28 posts

I find it well-made, challenging because it's technical with all those corners and I think you and your track deserve to have a place here as well.

We'll keep going deeper and deeper in time with very artsy, original tracks from the early years of GR. 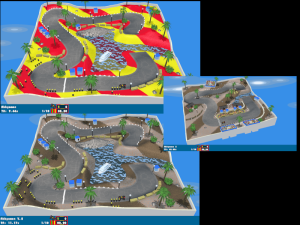 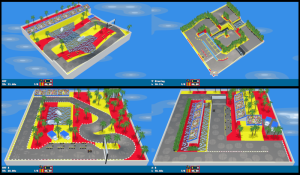 What is absolutely frustrating in sorting tracks for GR is that you have all the elements that lead to a trackmaker because they used the same techniques, are from the same dates he was active, but you can't decide lightly if you should move them to his folder. In this case it reminds me heavily on Errorman's tracks but as there's no name or even ghost records as Errorman, I can't be 100% sure. Anyway, those tracks are colorful, have good hmap work and stunt elements, and what I like is that this unknown ? trackmaker used objects overlapping starting positions to make a starting boost, on the track RYT. 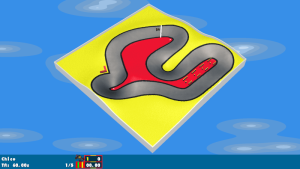 Really simple artsy track, which you can easily count the number of objets there are on it, 4. But don't be fooled by its apparent simpleness ; the layout is fun with the help of the good work on hmap and you'll not encounter lot of tracks as colorful as this one. Well, maybe the next one. 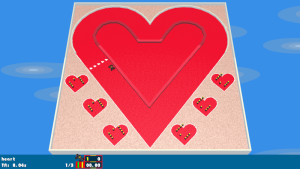 Aww it's cute ! Someone want to say I love you in GR ?

Good size, the use of soft walls are not an heresy here thanks to red lmap under them, maybe replacing those walls by discreet sunk tires or nowadays replace them by red cones would be better maybe. Mostly cool only for the lmap but the layout is balanced between corners and long straights. Give it a try lovers ! 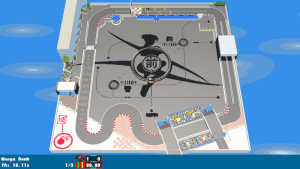 I did some research on it and I found the picture really similar to a manga called B-BoY Bomb which have the same black silhouette dancing but the first tome was published in 2006... Anyway it's from a manga but which one ? Do you know the answer ?

Talking about the track the lmap is unique with very stylish lines and logos all around, while the layout is quite simple and not well incorporated with the stunning lmap, and the objects are there to be there. An eye-candy track for sure, but may not drive on it too often. Could be much more though.

We'll be in 2002-2003 tracks mainly again, and here's another round of interesting tracks of that era. 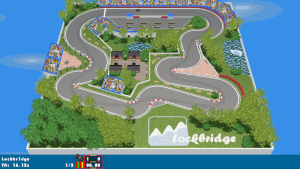 No way, it seems like it was made years later ! Considering the first ToM was in July 2003 wow. Even its own logo at the bottom, shame we don't know about the name's creator. This track is super neat ; objects are well placed, those lines are thin and good-looking and I really like the double white outlines of the layout. Not everything is perfect though, like those trees at the bottom which are a little on the filler side, but overall it's an incredible high quality track for 2002 and so early it's near unbelievable. A true gem of a track for sure. 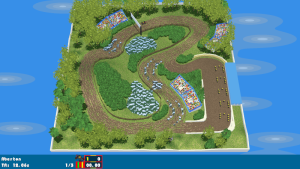 Again, something unique that will appear very rarely after, this lmap work on mud. I find it beautiful in comparison of sprayed mud which is simply ugly or if I can say it better, not as interesting or realistic visually as this. We can find this kind of lmap in Markus Moller P.Ralle or AeroWiewiur's rally tracks. Apart from this well there's not much, everything else is pretty basic but this is so rare to find this kind of lmap work in rally tracks and so early that it was worth mentionning. 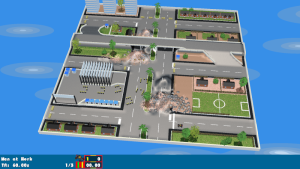 A cool concept in a street circuit, with those rocks and sand's piles on the road to show that there are some works going on. It's a shame that he didn't have the most modern GR objects as it could enhance this track tremendously, but regarding the date it's quite good honestly. I dig the black pavement even if it's unrealistic ; it adds a contrast to the track which is appealing visually. It could have more stunt elements, using the theme of road's works. 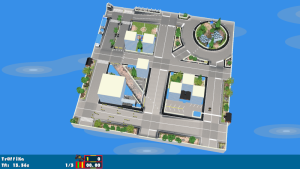 Two versions, a and b, for 2 different layouts. Maybe the same author as before as it have the same black pavement, and I'm really fascinated by the circle fill with nature and surrounded by this black pavement in the top right corner. It's like a case, filled with a little jewel inside. It makes me want to do the same, to have this big contrast with black colors and fill it inside with little worlds. For the track in itself it's the typical US city streets in squares, with good use of objects and a little truck at the left, ok track. 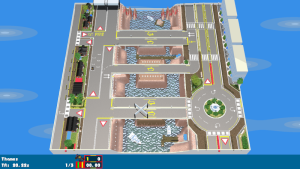 In England perhaps ? Quite stylish with those arrows, quite dry regarding landscape and objects because of the river at the center and all those bridges, and the arrows can be misleading sometimes when driving. But globally nice for the date, and I love the raft with many people on at the top, with a boat that seems sunked. Love those tiny scenes and details, makes a track unique even if the remaining is meh. I can't tell you what's this red color on those weird shaped cliffs at the top and it will still probably remains a mystery until this day. 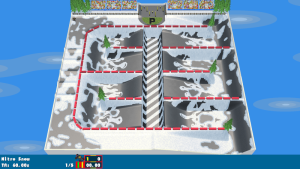 Wow it's quite an impressive track, and the name suits very well.

The snow is well made, remind me of Bathroom seen few posts earlier, near same style. A nice stunt track, long one though and a little too large but well made. 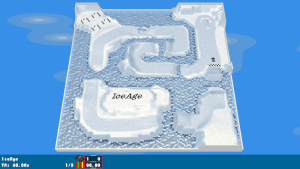 That's not a common landscape in GR and it could be great to see some tracks jumping from iceberg to iceberg.

Another stunt track, and unforgiving one as you'll not recover from falling. I like the fact there's the name of the track on it. It seems a signature of the artist and while it's unrealistic to say the least, it's still an artsy move and appreciated one, like in Mathee early tracks which were well implemented with the start/finish line, well designed. The hmap is a little rough but icebergs are sometimes rough as well. 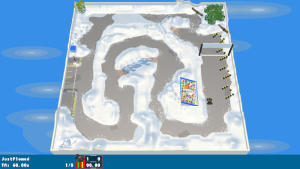 Great idea executed well visually, and driving wise I appreciate the fact that there are "shortcuts" possible along the main layout. I like this idea of having different paths to choose from depending on your car or your strategy. The AI is kinda bad at the first corner but good for the remaining of the race. 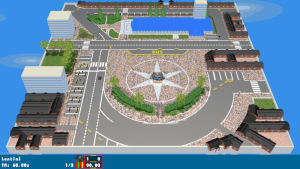 Would not be surprised if it's a real life city... and it is in fact a real city. Lentiai is located in Italy, with this exact same star shaped place and a church represented by this big blue building on the track. A good early effort to bring a real city to life in GR. 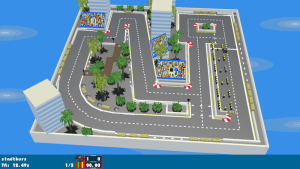 Incredibly simple in style but neat and well thought. A good early street gp track, not too big, a pleasant surprise.

I know those kind of tracks will not land in your folders but they are interesting regarding track creation and what was done early on. We can see that despite the big amount of crappy tracks from that era, some gems like this were made and are worth to drive still today even if modern standards are higher. Hope you enjoy the journey.

Return to “Discussion about GeneRally”