In mid 2008, I was working on a big trackpack. It contained tracks, which were made with one goal in mind: they had to be circuits, they had to be fictional, and they had to be as different from themselves as possible. Fictional Circuit Trackpack was born. Set of eleven was estabilished and I've tried to polish them as much as possible, it would be my best creation in my short life, showcase of my abilities, something that I could be proud of. My will was so strong, that I worked on them for a very long time, weeks, months, years, and then it was gone. I was very sad. And today, wandering around the internets, I've got an idea. I've checked it and yes - the trackpack was on one of my website hosts, hidden in dark corners of directory tree, untouched from 22th December, 2008. And thus, I'm very happy to proudly present...

Endeokaun
http://img341.imageshack.us/img341/1325/endeokaun.png
Dubbed "Duck Raceway". It has many harpins, tricolor kerbs, and small lake. One of few tracks on which I didn't placed forest.

Polaf Oval
http://img52.imageshack.us/img52/2192/polafoval.png
It's not a true circuit, but it's certainly not a rally. Enought to put it in.

Sipse
http://img62.imageshack.us/img62/8246/sipse.png
It's very twisty. And even more bumpy. Excellent for longjump contest.

Weenil
http://img197.imageshack.us/img197/1101/weenil.png
The icing on the cake. Tarmac run-offs, good looking pits and kerbs. And it's fast.

Rybaki Mall
http://img100.imageshack.us/img100/6738/rybakimall.png
I don't remember this track well, and it's more unfinished than finished, but it was in same zip. It doesn't look like a mall at all. Consider it as a bonus. 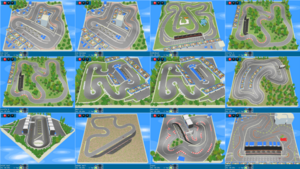 They are good, but Rybuki mall is just awful.

Wow, I'm loving the HMAP in all your tracks. Such a great rollercoaster feel in Endeokaun, and laughing at the skidding AI in Sipse and Pintalo.